Nail fungus, or Onychomycosis, is a fungal infection in one or more of your nails.

Typically, the early signs of nail fungus are yellow or white spots under the distal (outermost) part of nails. These white spots represent sub-ungal hyperkeratosis. If left untreated, these spots begin to spread throughout the entire nail, and nail will become separated from the nail bed (onycholysis), or discolored, wrinkled and thickened. Nail Fungus occurs more often in toenails than fingernails. Not only is toe nail fungus unsightly, but it may be quite painful in case of severe fungal involvement (rare).

These fungal infections are a result of fungi growing in and under the nails.  In general, the fungi will enter through a small cut or a separation between the nail and the nail bed or after a pedicure.  Then, if conditions are right (warm and moist), the fungus will continue to spread throughout the nail. Patients with Diabetes, or those who wear boots in warm and humid weather are more prone to nail fungus. Some patients with HIV develop fungus in finger nails; superficial nail discoloration could be an early sign of HIV. 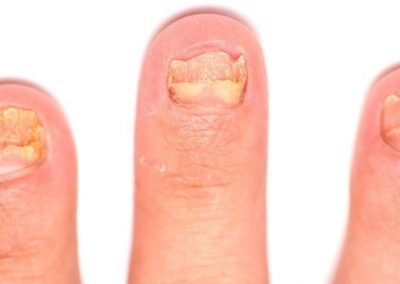 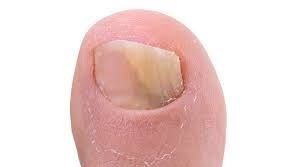