● Vitiligo is a disease in which the pigment cells of the skin, melanocytes, are destroyed in certain areas.

● Vitiligo is a disease in which the pigment cells of the skin, melanocytes, are destroyed in certain areas.

● Symptoms and signs of vitiligo include loss of skin color in the form of depigmented, or white, patches of skin in any location on the body.

● Vitiligo can be focal and localized to one area, or it may affect several different areas on the body.

● The exact cause of vitiligo is unknown, although most experts believe that it is an autoimmune condition in which the body’s immune system mistakenly attacks and destroys certain cells within the body.

● Most people who have vitiligo will develop the condition prior to age 40; about half develop it before age 20.

● Vitiligo may have a genetic component, as the condition tends to run in families.

● Vitiligo is sometimes associated with other medical conditions, including thyroid dysfunction.

Vitiligo is a common skin condition where there is loss of pigment with white spots or patches on different areas of the body.

This condition is thought to have a genetic or autoimmune component. The most common areas affected are the face, hands, arms, legs and sometimes the genital areas.

Anyone can develop vitiligo, and most that develop it are in good health. Vitiligo is not contagious and it is treatable. However, treatment can take up to two years to regiment the affected areas. 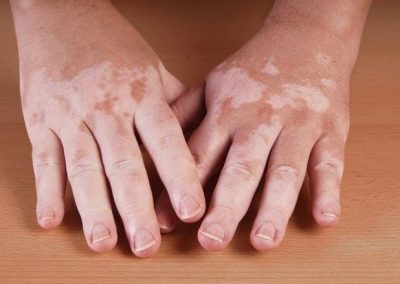 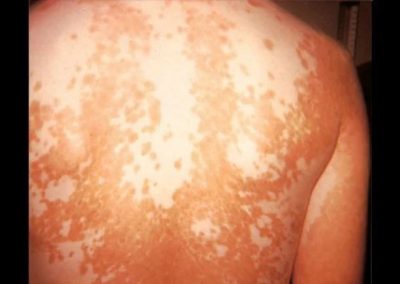